Father James J. Vesely, pastor emeritus, passes away at the age of 94

On Wednesday, July 27, Father James J. Vesely, pastor emeritus of St. Thomas More, passed away at the age of 94. At the time of his death, Father Vesely was the longest-ordained priest in the Diocese of Cleveland. 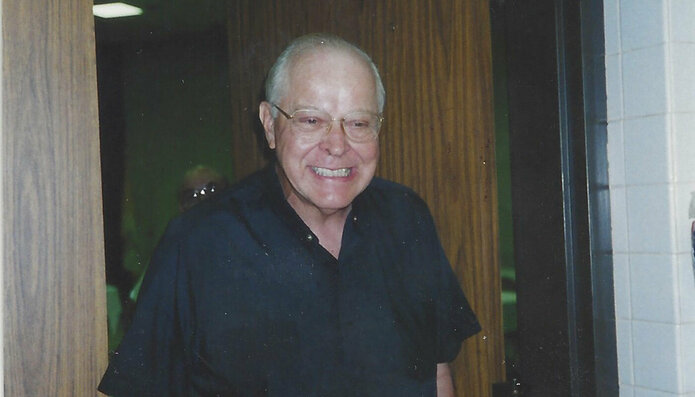 For those who remember him, Father was known for his deep booming voice and his love of singing. By request, Father would sing “Goin’ Home” at parish funerals while school children were entertained by his Litany of Thanksgiving as he would encourage them to chime in with “we thank you Lord.”

Father Vesely became the pastor of St. Thomas More in 1987 where he remained for 18 years until his retirement in 2005. After retiring, Father Vesely resided at nearby St. Leo the Great Parish in Cleveland where he was still just a stone’s throw away from St. Thomas More. Sometimes in the evening hours, parishioners would see his car roll through the lot with his trademark cigar in hand checking in on his former parish. As he began to need more assistance, Father would later move to Mount Alverna Village where he would use an electric scooter to continue to minister to his fellow residents. 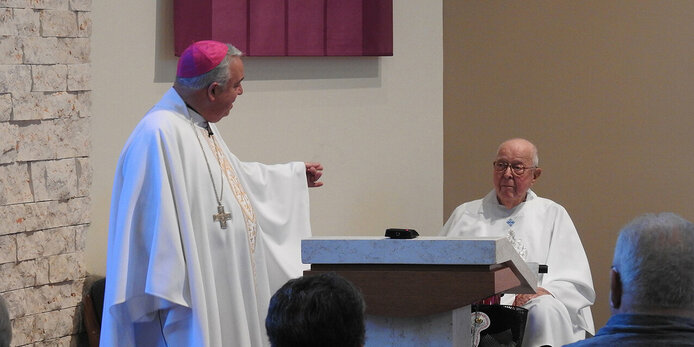 In 2005, Archbishop Nelson Perez, who at the time was the Bishop of Cleveland, celebrated Mass in honor of Father Vesely at Mount Alverna as Father celebrated 65 years as a priest. Click HERE to read the story on the diocesan website. 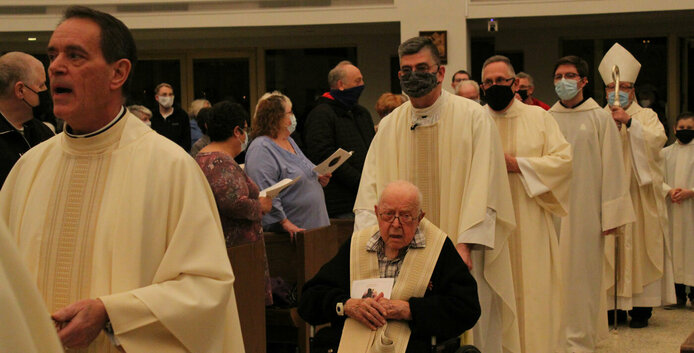 Father’s last visit the parish was this past February when he attended the installation of Father Mike. While confined to a wheelchair, Father Mike wheeled Father Vesely up the center aisle during the Mass’s opening procession. During closing remarks current Bishop of Cleveland, Bishop Ed Malesic, noted Father Vesely’s presence to which the congregation erupted in a long round of applause. Father Vesely’s voice echoed throughout the church with a loud, “thank you!”

While Catholics can easily recite the Our Father and Hail Mary and the like, St. Thomas More parishioners also knew the prayer to St. Michael the Archangel as Father Vesely would recite it following the Universal Prayer during Mass.

In the notice on the diocesan website, it reads, “Those who knew him said Father Vesely had a big heart, loved being a priest and was well loved by his parishioners.”

“For all things great and small that go unmentioned…but especially for the life and ministry of Father Vesely…we thank you Lord!”

St. Thomas More uses Faith Direct to coordinate online giving. Our online giving program allows you to donate weekly as well as special collections and funds. We thank you for your support.

Parishioners can access hundreds of movies, ebooks, short-series and more via FORMED.

We send out periodic news, reminders and important announcements via email and text.

Just as in the times of Jesus, from time to time, parishes request each household to complete a census to ensure that it is accurately representing the size and scope of the parish community.